I really love our new lounge. While we've since needed to rearrange a bit (with an impending little person needing some accommodation) it's still such a nice room to eat breakfast in in the morning. To lounge about on the couch in the sunshine, to read a book or knit in with the french doors open, listening to the chooks have their conversations, the wafts of honeysuckle breezing in and a cat or two wandering past every now and then for a pat.

It wasn't always this way... 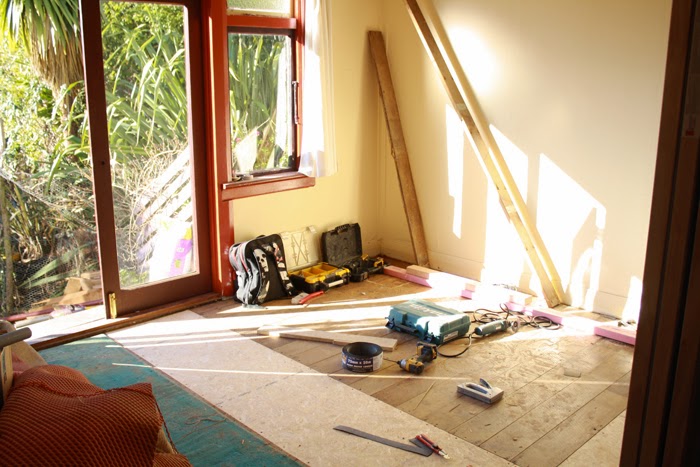 Initially we had thought that the far corner (where the wood panels are leaning in the photo above) was sinking slightly, as when you stood in that corner, it felt lower than the rest of the house. What had actually happened was when the room had been turned into one (a few owners ago) the wood beam flooring had somehow become strained and had started straining upwards in the middle of the room. So what we thought was the corner sinking, was actually us walking over a small hill and down into where the floors should properly sit.

So, the builders took out the middle section of floor, released the pressure (taking away the squeaks at the same time!!) and miraculously made the floor level again.

It was never hugely out of balance, but it's nice to have that fixed now. Also, since we were always going to carpet this room, they took a few floor boards to use to replace the two small spots of dry rot we found in the house after we moved in, to keep the same flooring throughout. 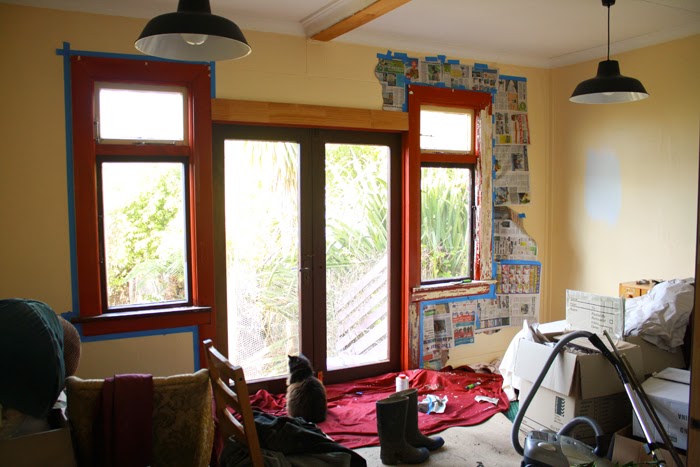 And then we stripped the window sills back to their former natural wood glory. (New lights were already in at this stage as you can see in the photo above).

They aren't by any means perfect though. Borer has had a party in them (as well as some more wooden flooring as we found out over Christmas when we were sanding!!) and previous owners have decided to try and bog up the borer holes and paint over them to make them go away. Ummm, borer needs to be rid of first guys, just sayin.

So, before we varnished the wood, throughout the whole house, we directly treated it and did a general bug bomb, then used proper wood putty to seal up the holes and then varnished. Again, the window sills don't look like they were made yesterday, but we actually kind of like them that way. It shows a bit more of the history of the house and since it's not a new house, I don't think these things should look perfect anyway.

Below is the room the morning before the carpet went down. Isn't it lovely? Don't worry, the rest of that old carpet went bye bye as well...

Dulux St Clair Quarter was used on the ceiling and trims and Aniwaniwa Half on the walls. We have that lovely little panelling detail in most corners of the rooms in the house and David thought it might be quite cool to leave them the trim colour as well - I couldn't agree more. 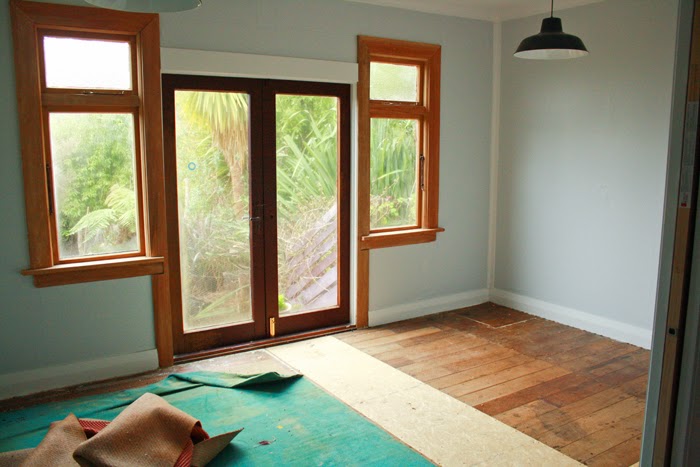 You can also see that we've not sanded back the wood around the french doors yet. They are a much darker wood anyway (they would have been reclaimed from elsewhere when this room was first remodelled) and while we will eventually, that hasn't happened yet. Luckily it's just a wood stain, rather than actual paint. 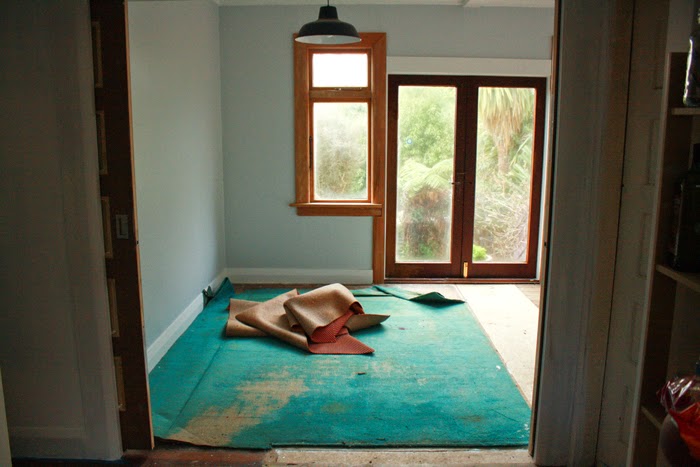 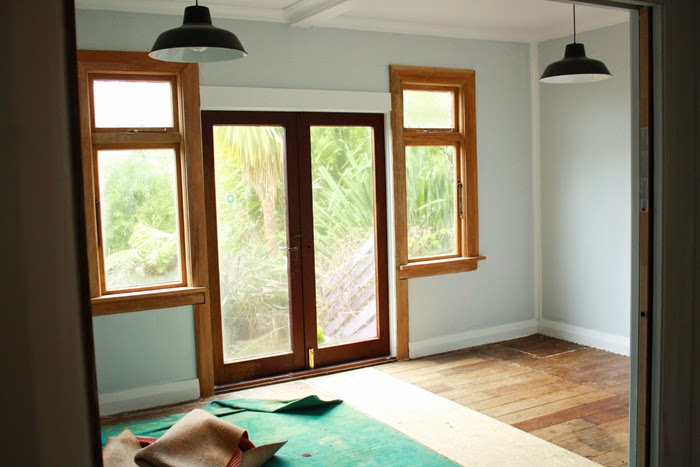 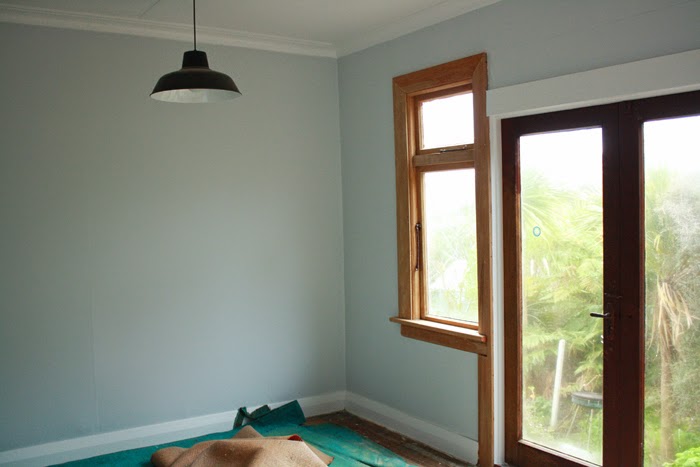 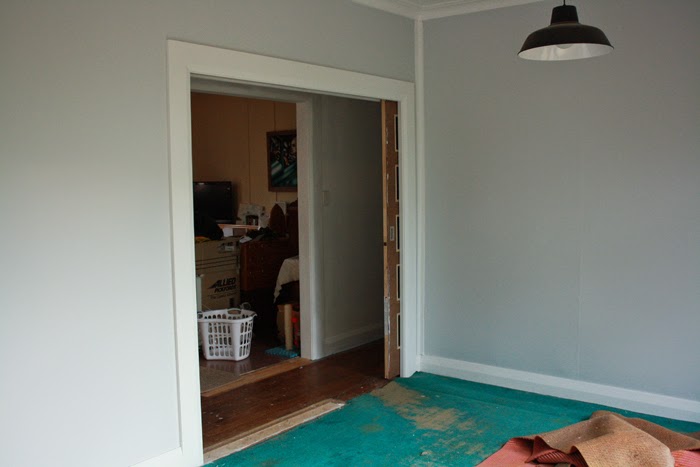 And the carpet goes in... 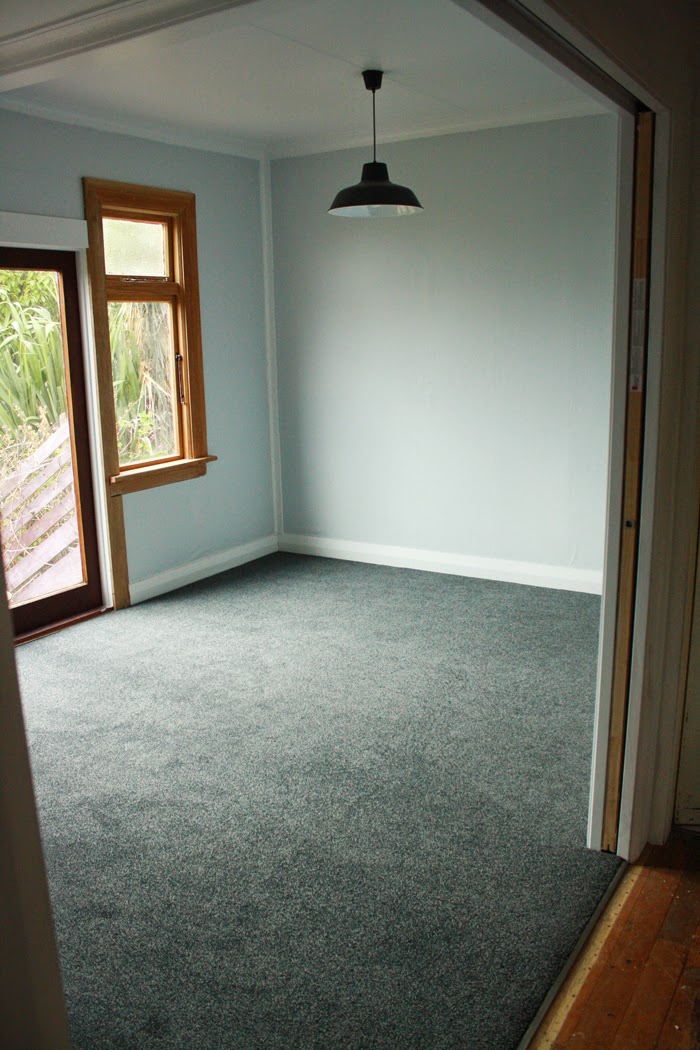 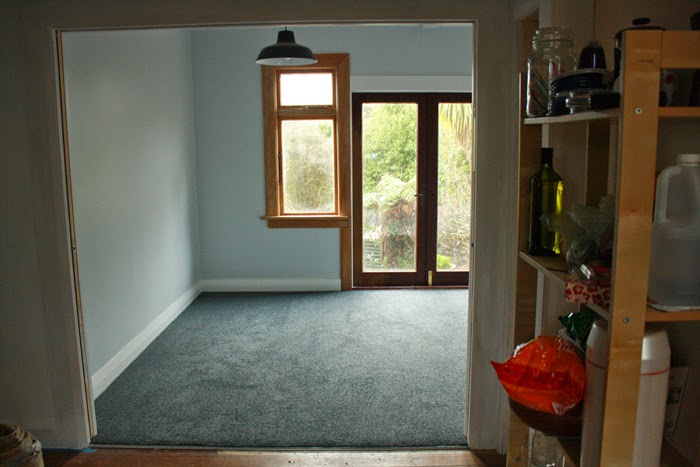 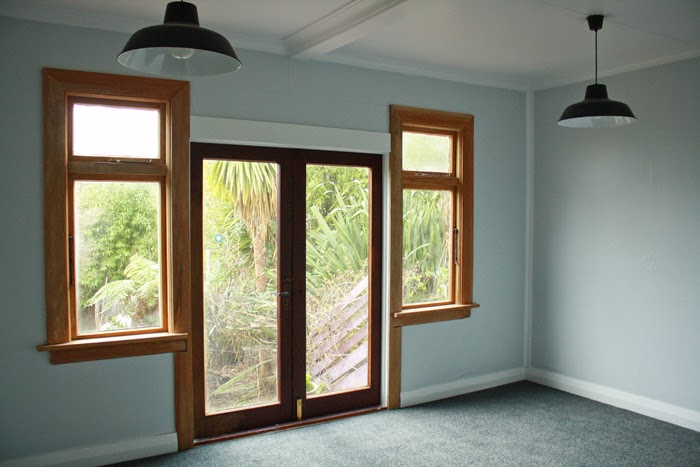 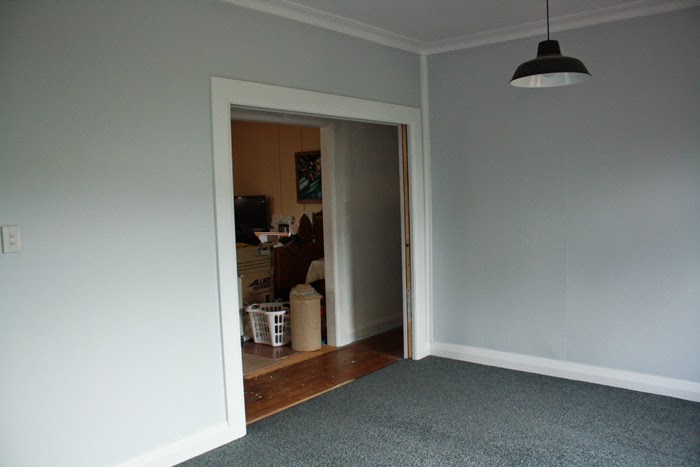 I cannot tell you how soft and squishy and lovely this room is to walk in now. My original idea was to go with a natural brown colour, to be a bit more in keeping with the wood flooring in the rest of the house, but we couldn't find the colour we wanted with the durability we wanted.

We bought this steely blue grey, short pile sample home with us, including a bunch of others, and really fell in love with the colour of it. Initially I was worried about the room maybe seeming too dark with a dark carpet, but the room is so light anyway, and the lighter colours in the carpet almost seem to reflect light back up. We also have rather colourful taste in the things we put into rooms, so we felt that it would actually be fine. And we love it!! 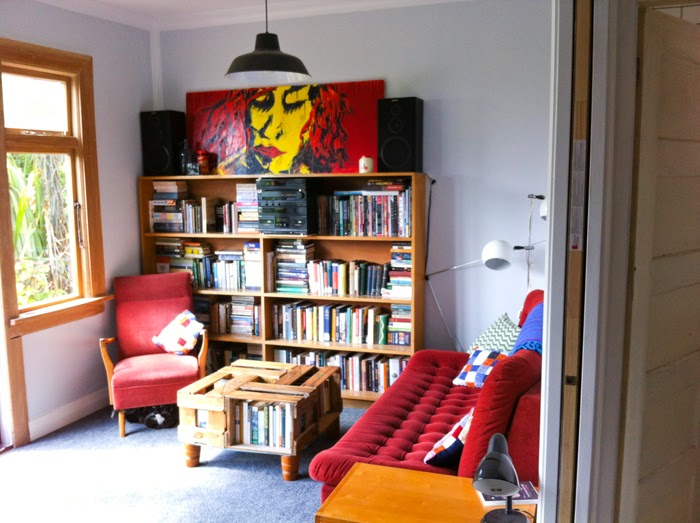 A sneaky peek at how the room looked with some furniture in it. I won't show you the full room since we're moving things around now and we've not put everything up on the walls yet, but it's such a lovely room that has had rather a huge transformation right? No more green racing carpet for a start...

Labels: I need wine, we don't know what we're doing