First posts are tricky aren't they? I think that's why we've procrastinated getting this wee blog up and running.

You have to introduce yourselves (Hi, I'm Jen and this is my husband David, we live with our two cats Mocha and Monty and three chickens Rosemary, Marigold and Daisy), you have to explain a bit about the blog (this blog is about chronicling our foray into first-home-ownership, renovation and living the kiwi dream — whatever that means) and you have to talk a little about what your plans and hopes are for the blog (we hope to blog about all the things that come with owning a home that needs a bit of work, and a huge garden! All the good bits, and all the bad bits. Gardening tips, DIY ideas and recipes are of course part of the menu, even if we don't quite know what we're doing!). 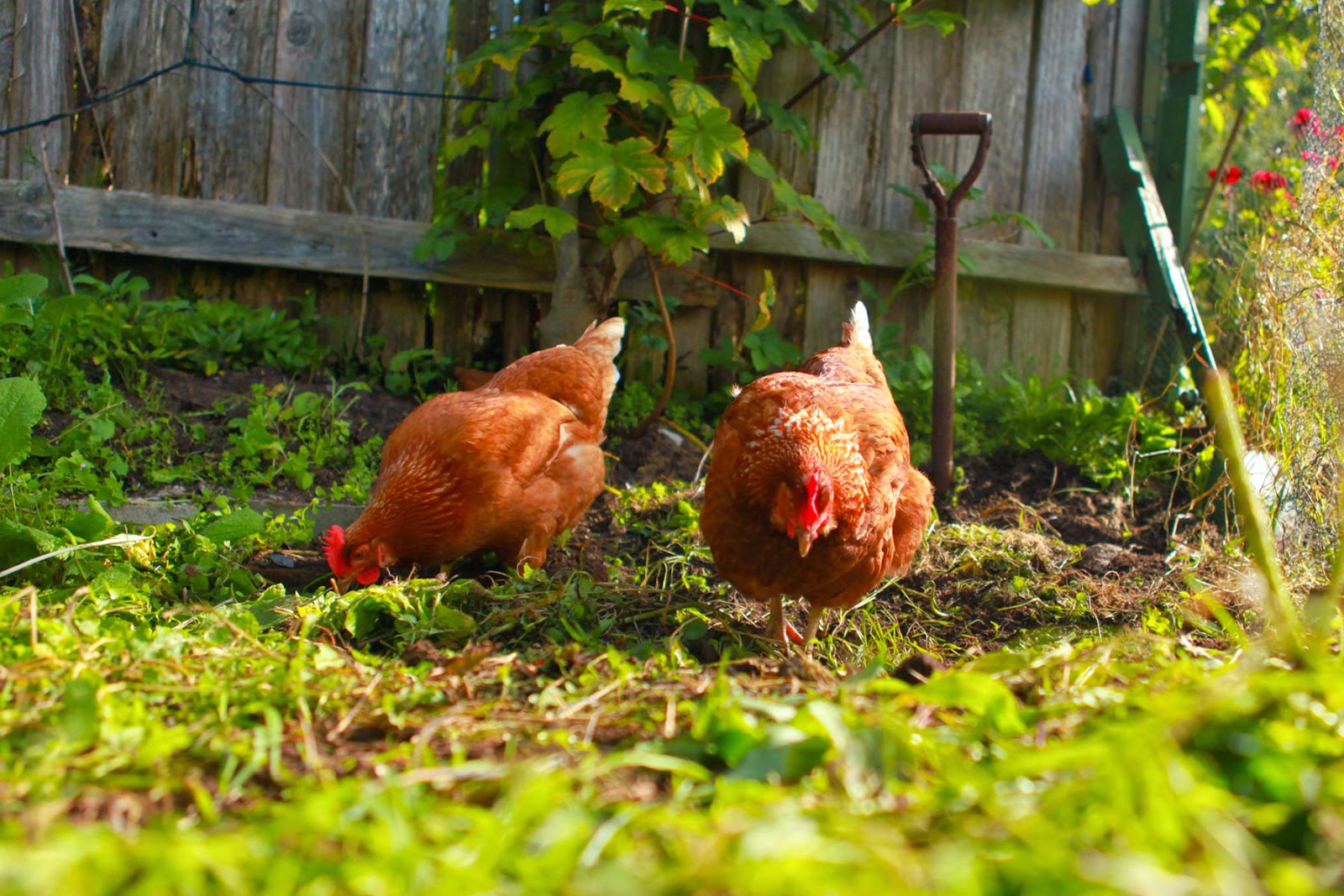 Well, I suppose it wasn't that hard was it?

Let's start at the beginning shall we...?

In September 2013, after 4 years of living in Sydney, David and I decided to move back home to New Zealand. David had just completed his PhD and Sydney living was expensive. So, we moved home, back into my Father-in-Law's house while we waited to hear back about PhD news and plan an overseas holiday to Italy and the UK.

Initially, buying a house wasn't really the plan. But we slowly realised that PhD news wasn't going to come as quickly as we had hoped, and as much as we loved living in the grand old house that was my FIL's, we really wanted a place of our own. If we had to move elsewhere for jobs for David (academic jobs are few and far between, and beggars can't be choosers) then we would just rent the place out.

We did our sums, and surprisingly, they added up. Renting a place of our own was going to cost more in the long run than buying a house (within our budget, of course).

So, right before we left for our trip, we found a house we liked in the area we wanted to live in. It was in budget and it was cute and rentable if we had to leave.

Only problem? Someone else was prepared to pay more for it than we were. So, with sad faces, we headed to Rome (which I guess wasn't actually that bad!). Eight weeks later, we returned home and started looking again but as the holiday period loomed, house pickings were slim.

To our surprise, during that time, along came another house we wanted to buy. It was a private sale and it seemed like it was the one for us. Alas, after Christmas, came the news we kind of already knew was coming, the vendor had decided not to sell after all as he had just signed another six-month work contract.

Then, in January, third time lucky, we found this house. 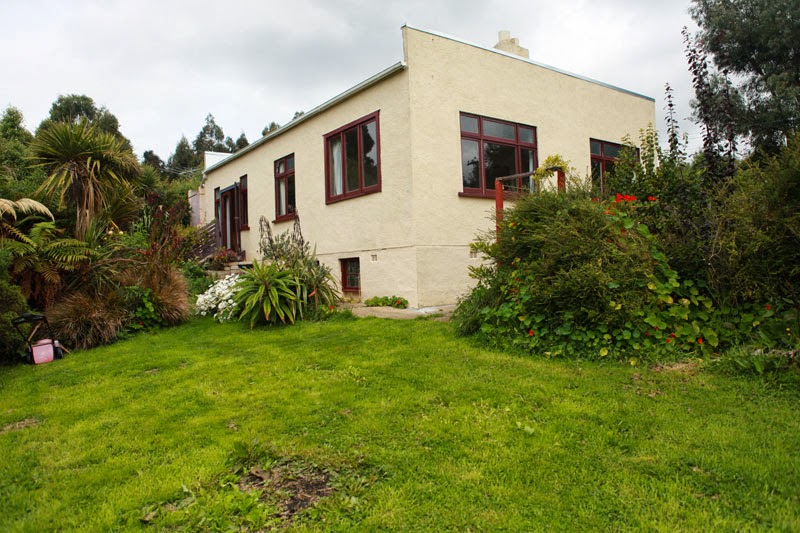 It wasn't exactly love at first sight. It didn't have that pretty street appeal that some of the other houses we were looking at did. But it had an amazing garden, it was private and at the end of a quiet cul-de-sac, it was bigger than the other houses and it was cheaper. 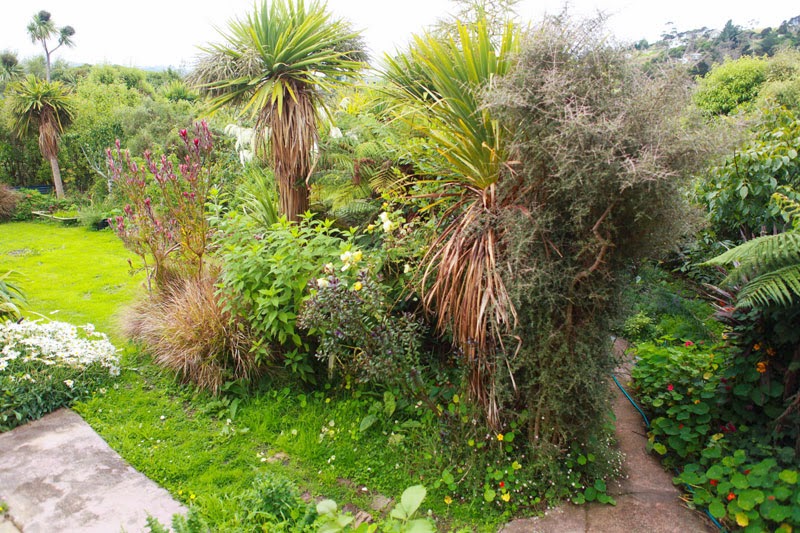 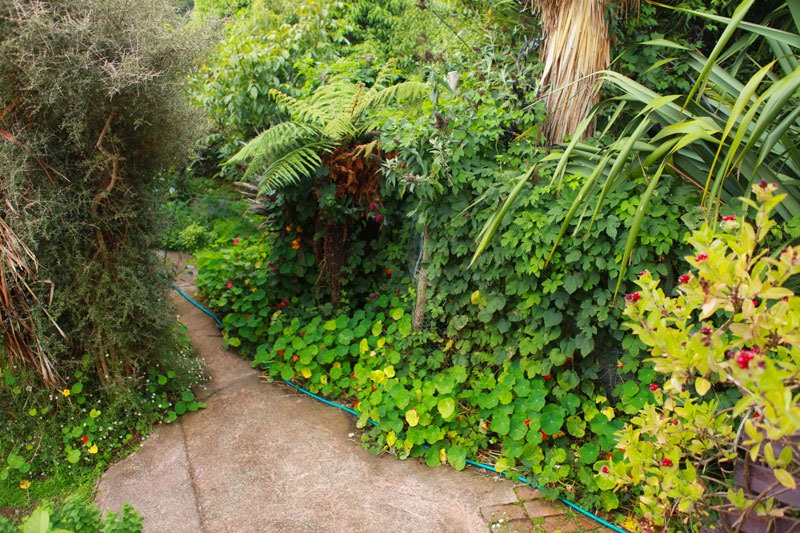 What's down there then...? (That's the hen run in all that nasturtium on the right!) 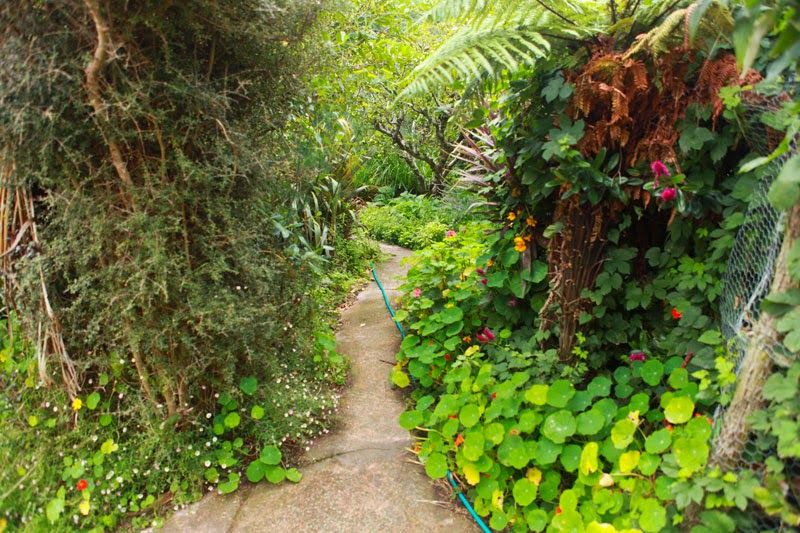 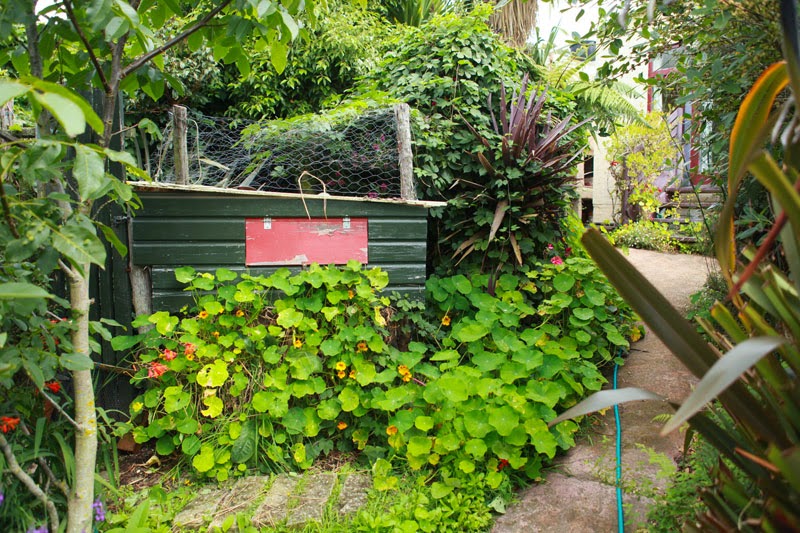 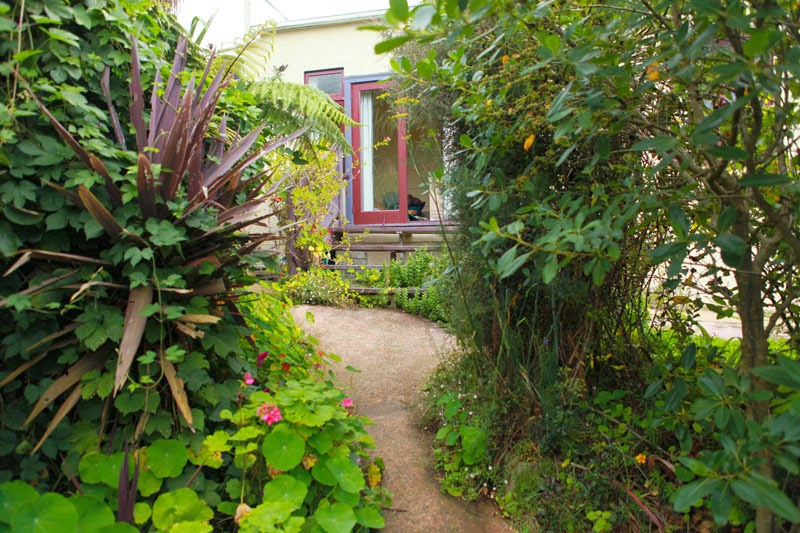 And the french doors of the room that will be the lounge. 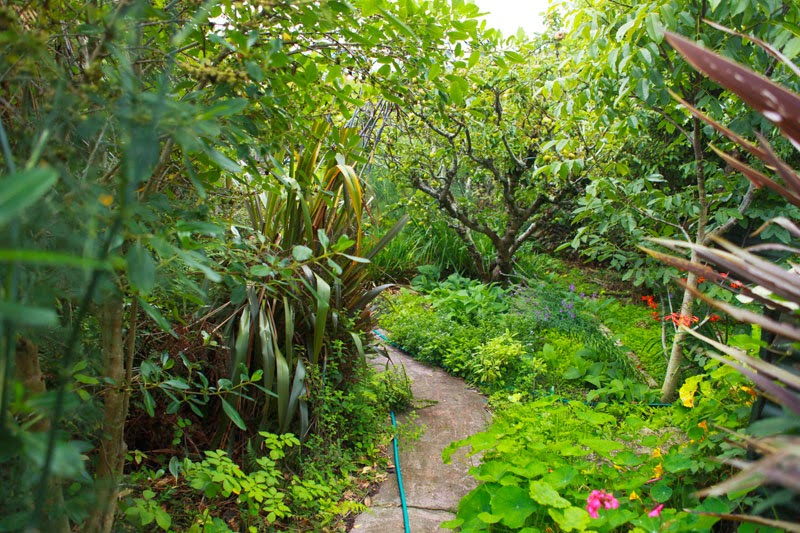 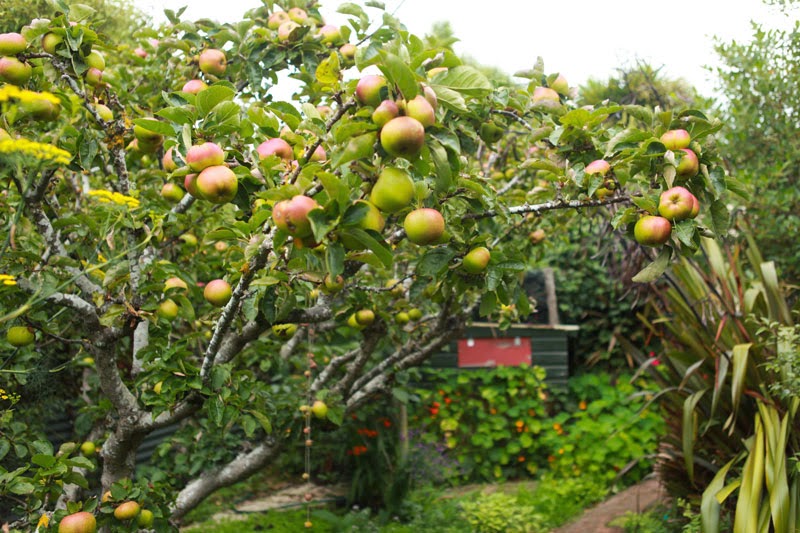 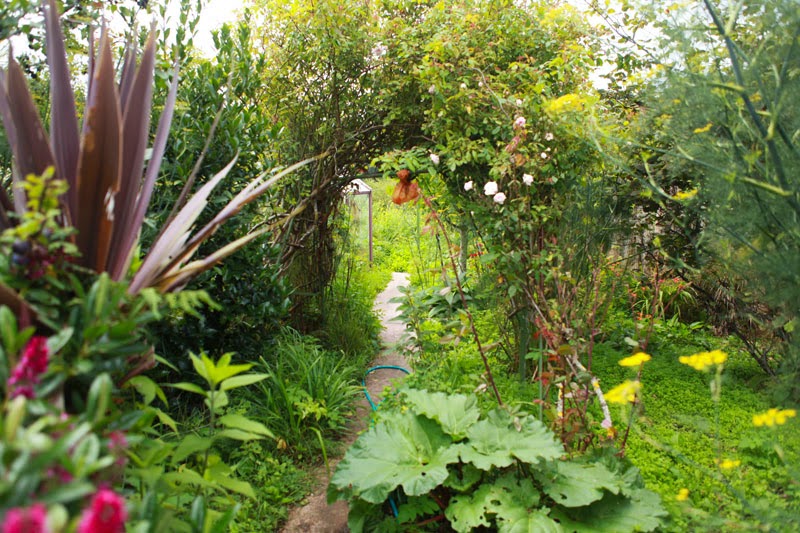 Round the bend, to a large rhubarb and climbing rose... 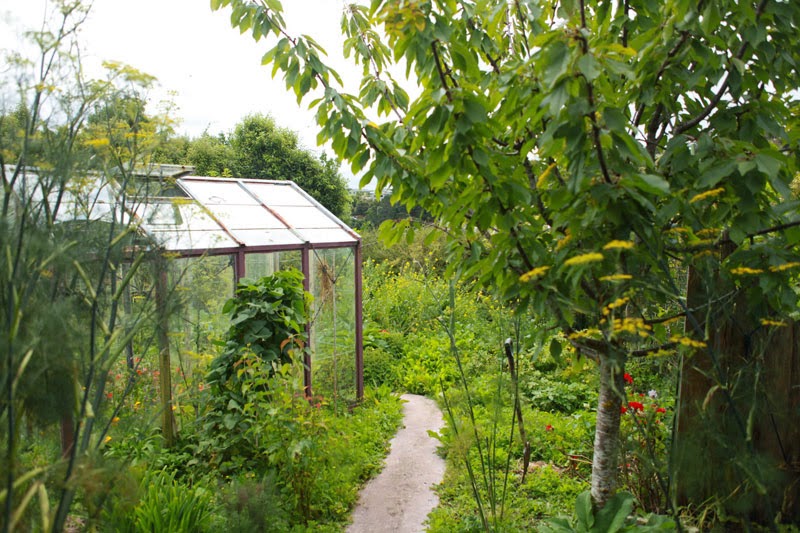 Under the rose and the first glass house on the left and a small cherry tree to the right... 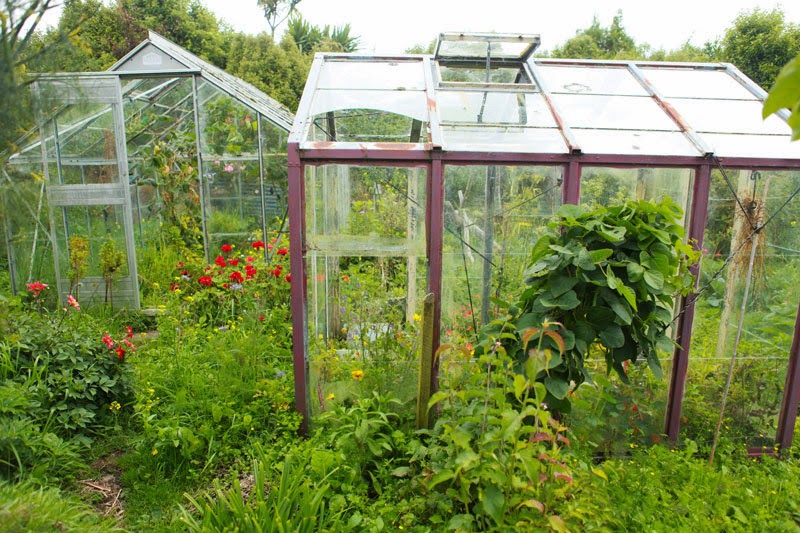 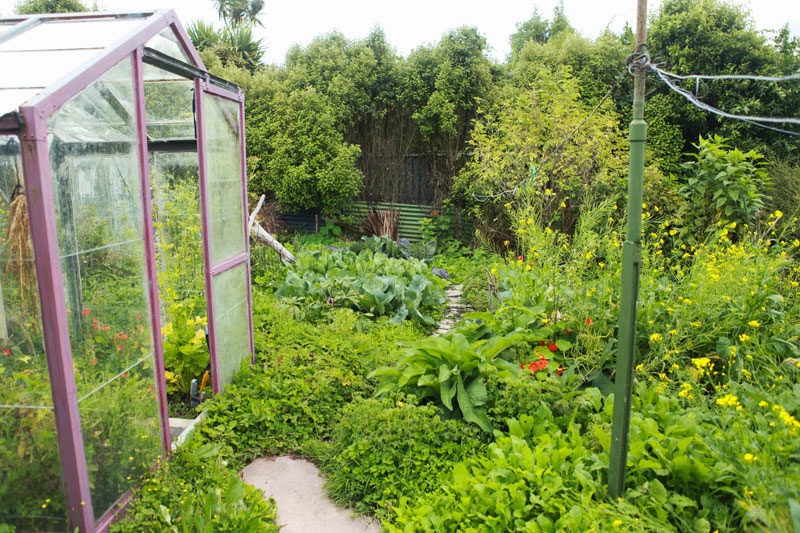 Ummm, I think some plants threw up in our garden... 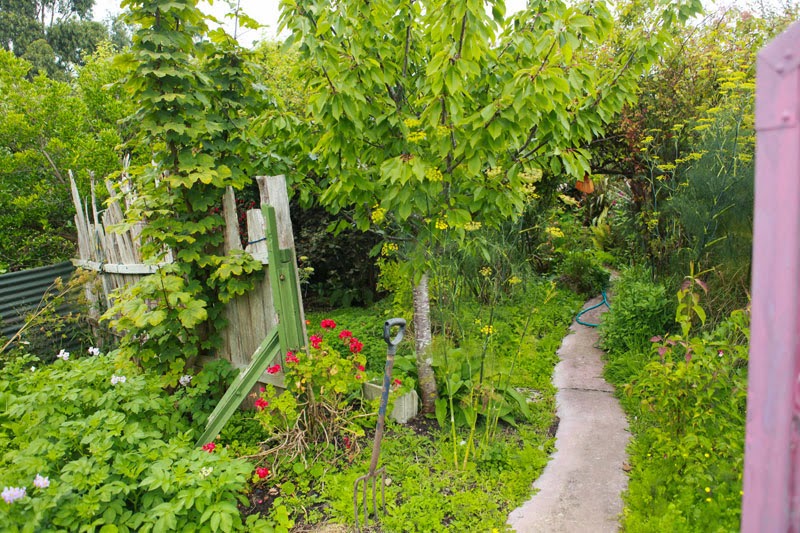 Looking back up the path we just came down. Yep, and more of them there potatoes on the left. 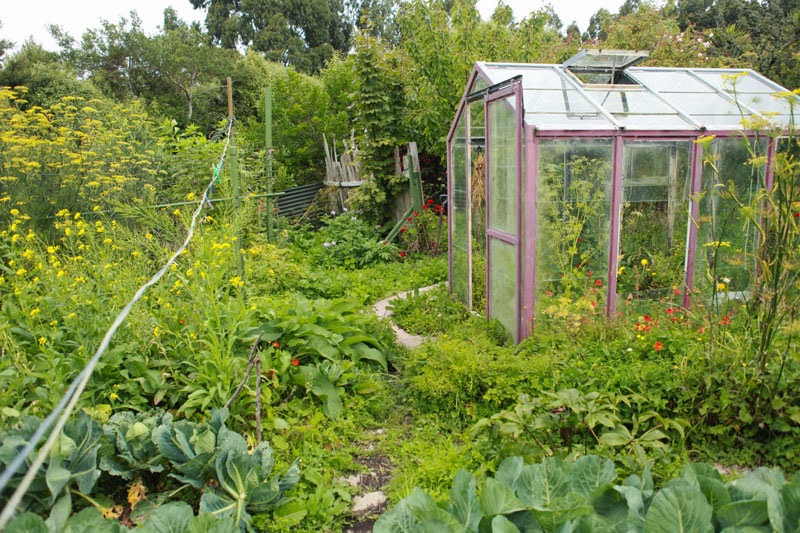 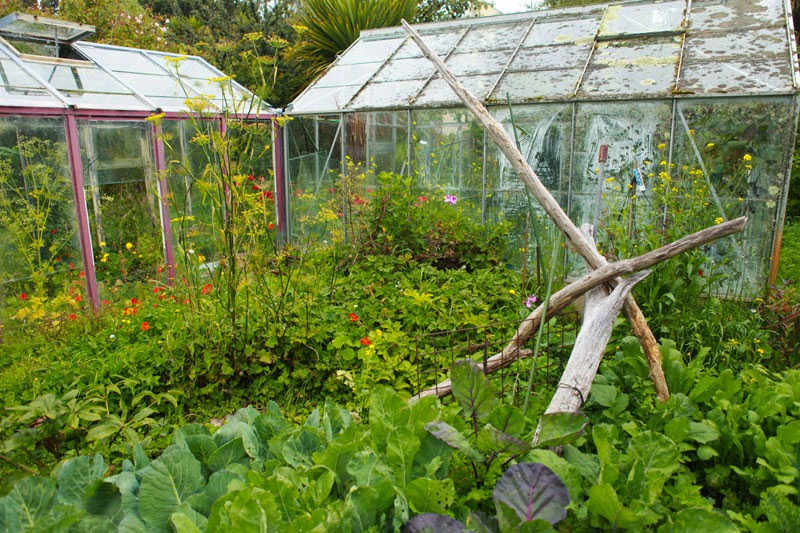 We looked at the house three times, each time knowing more and more that this was the one. Yes, it needed work. But the bones were good, it had a lovely feeling about it, it was filled with all-day sunshine and we could put our mark on it. Oh, and its chattels included chickens — three to be exact.

Looking back now, the sale actually went quite quickly, but at the time, it dragged on. I didn't want to get too excited about the house just in case it didn't come through again, but it was hard, especially when we had mentally moved in already (and we were getting desperate to unpack our boxes from Sydney that held all our possessions, waiting, lonely, in the sitting room at the FIL's). 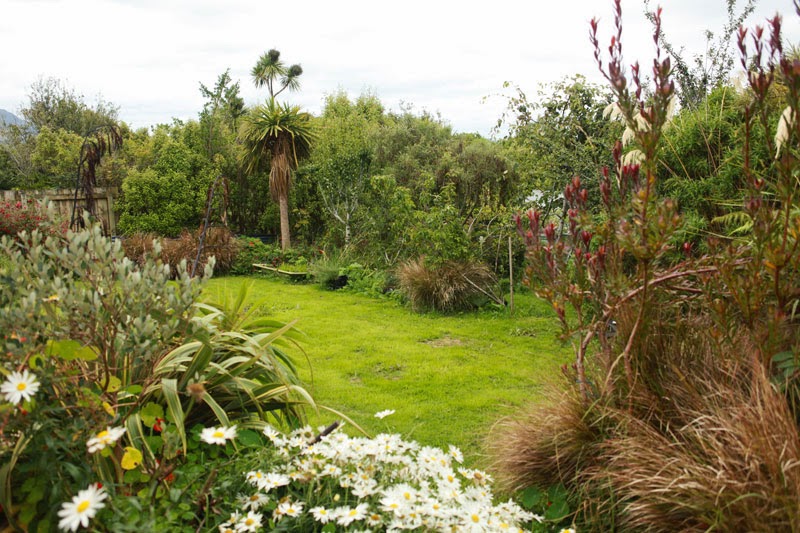 The two other apple trees, pear and two plum trees line the back of the lawn. There are two feijoa trees on the left of the photo. 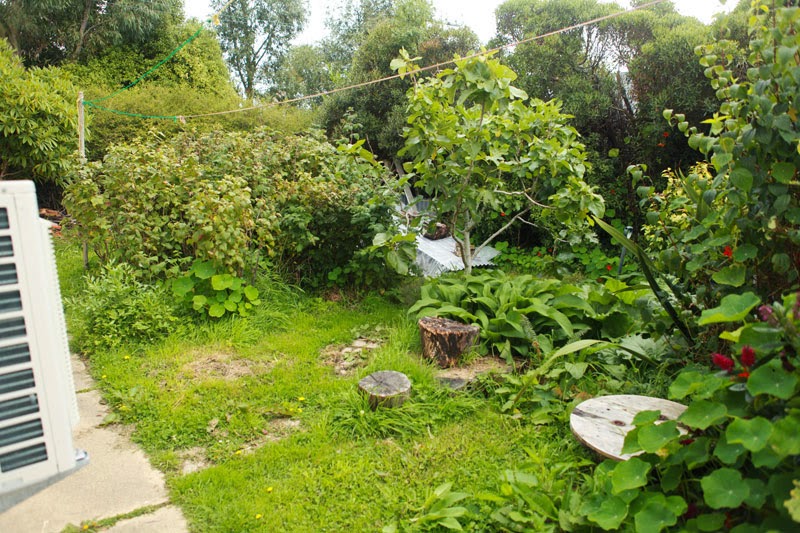 The side of the house — that's a fig tree in the middle, some raspberry and current bushes on the left and more rhubarb tucked away to the right. 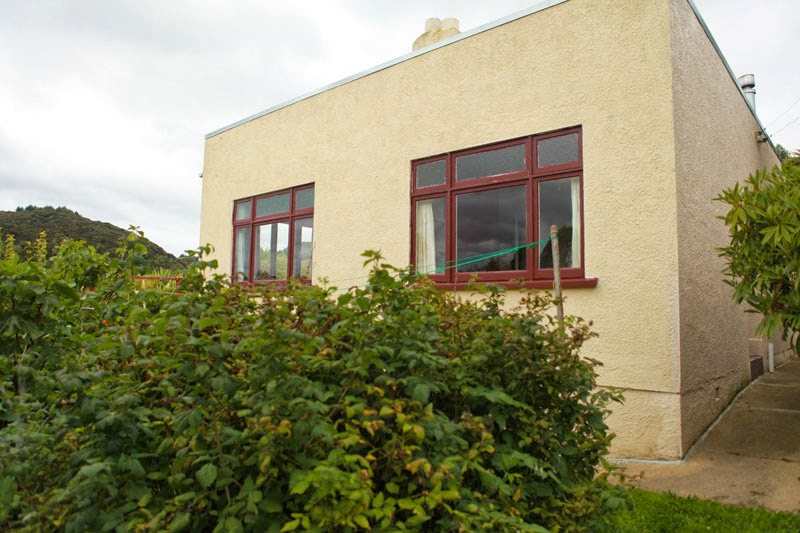 Same side, different angle. My sewing room on the right and the study/library on the left. Both rooms get some amazing sun! 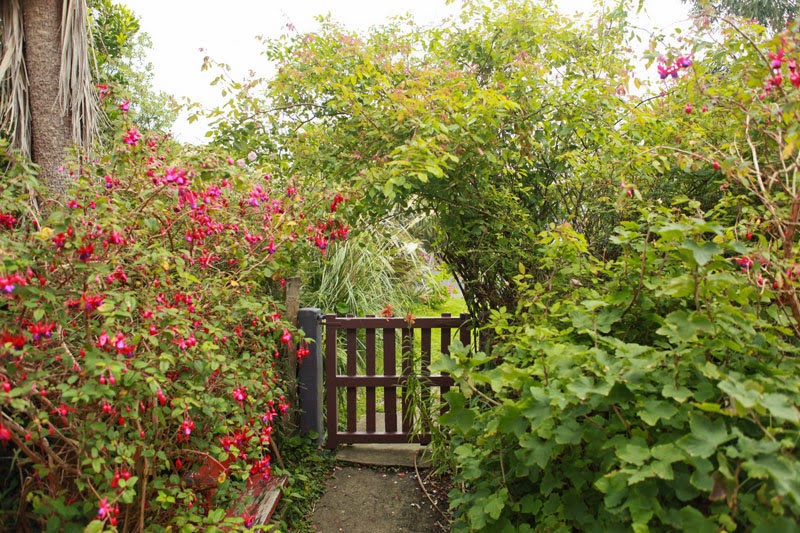 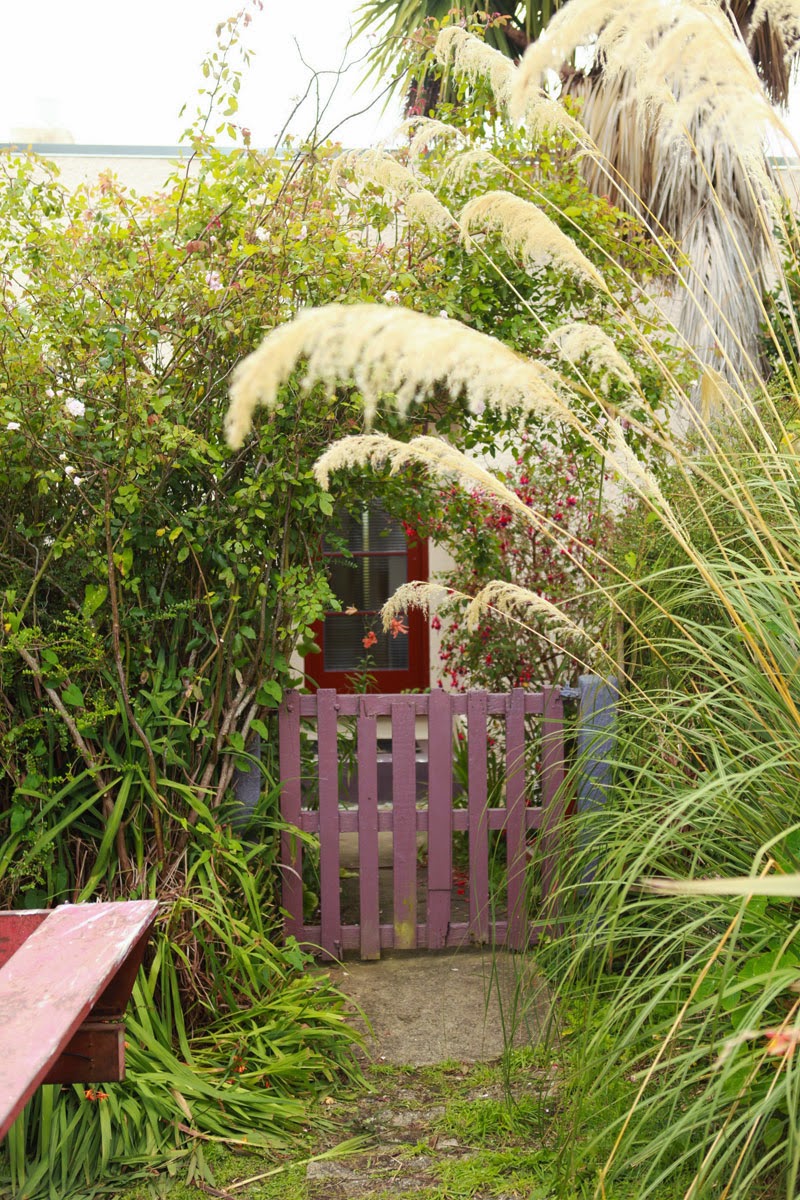 The front door gate from the road... 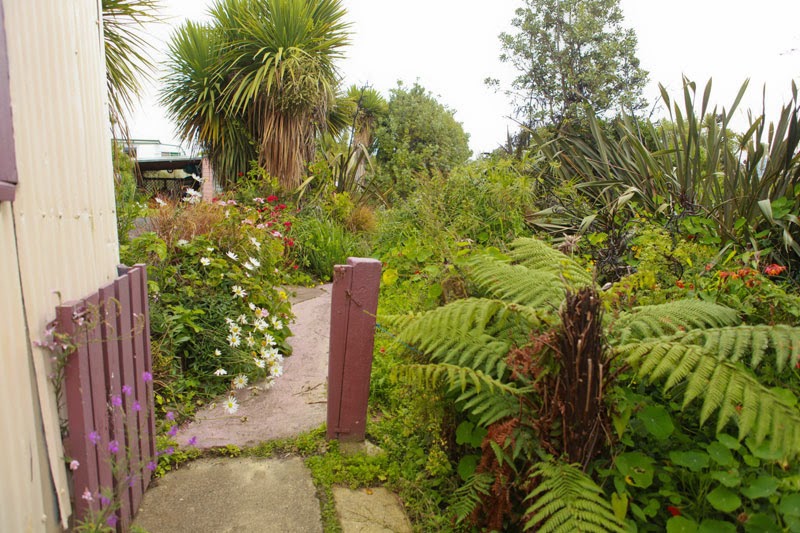 The back door gate... 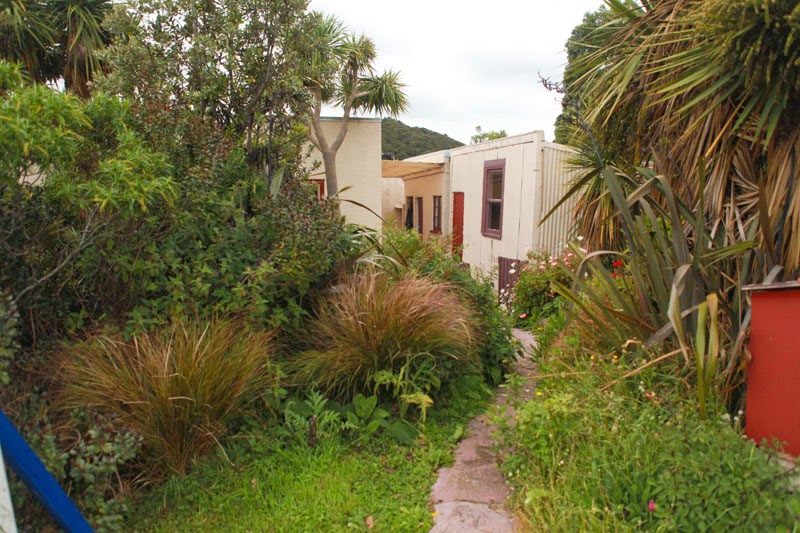 The back door gate from the road. 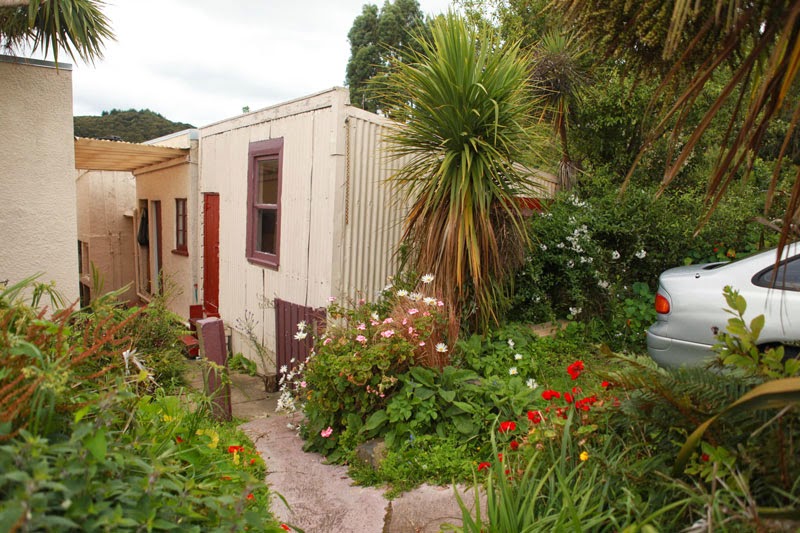 From the road — the house and the back door are on the left and some storage/laundry/old cement water tower thingy on the right. Not the prettiest sight you ever did see, but the flowers help :)


The day we moved in was torrential rain. The first day in two weeks it had been that heavy. We did one trailer load, unpacked a very wet couch and called it a day.

Five weeks later, and we are loving the house. I can't believe how warm this lovely old lady is (she was born in the 1940s, but a lady never reveals her actual age. Though I'm sure with some digging around the council archive we'll turn up that bit of information). I've started calling it the Summer House, because, if you've ever lived in Dunedin, you'll know how cold it can get, and how days-wearing-skirts-without-stockings are few and far between, even in the height of summer. Now I'm sitting here, in a t-shirt, too hot, typing this while the wind howls and blows outside, with no heating on. I'm not complaining.

The photos dotting this post are ones I took on the day we moved in, in between rain showers, of the garden. We've since spent A LOT of time in the garden, clearing and tidying up, and while there is still a lot more to do, it's looking pretty good. (If we do say so ourselves.)

So, welcome to our house blog. I hope you'll be warm and comfortable here. There are fresh eggs in the fridge, a lot of cabbage in the garden and a several litres of stewed apple in the freezer, so do help yourself...

Labels: owning a home is weird, we can't believe it's taken us five weeks to write a blog post, we don't know what we're doing