Let's have a look at the bathroom shall we? The Electrician was in yesterday and put the new light in, now we just need to paint the window frame (black) and that'll be it! Bar a few homey decorations of course... 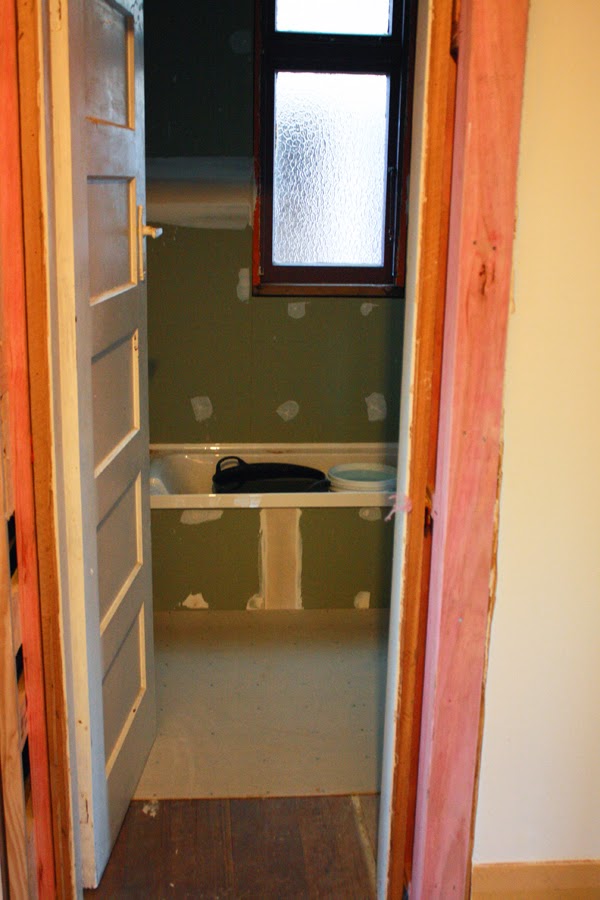 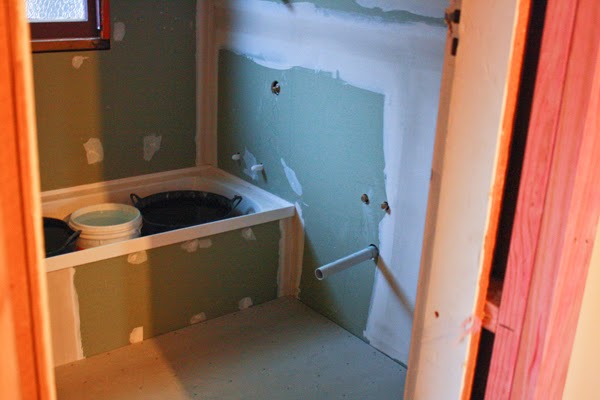 The tubs of water are to weigh the bath down, while the glue, or whatever it was, dried, to keep the bath firmly in place.

David was still away at this point, so I sent him the photo below and told him I had decided upon a Mediterranean decorating theme and was going with orange.

Don't worry, the bathroom is not orange! That orange coating is what they need to put on top of the aqua gib so that the tiles would stick to it (being a water-proof wall system, things being stuck to it, including paint, need a base layer to adhere too. Look at me all knowing what I'm talking about!! Not.)

Since the shower was near the window, we couldn't install a standard shower wall, and we wanted tiles anyway, so this was the beginning. 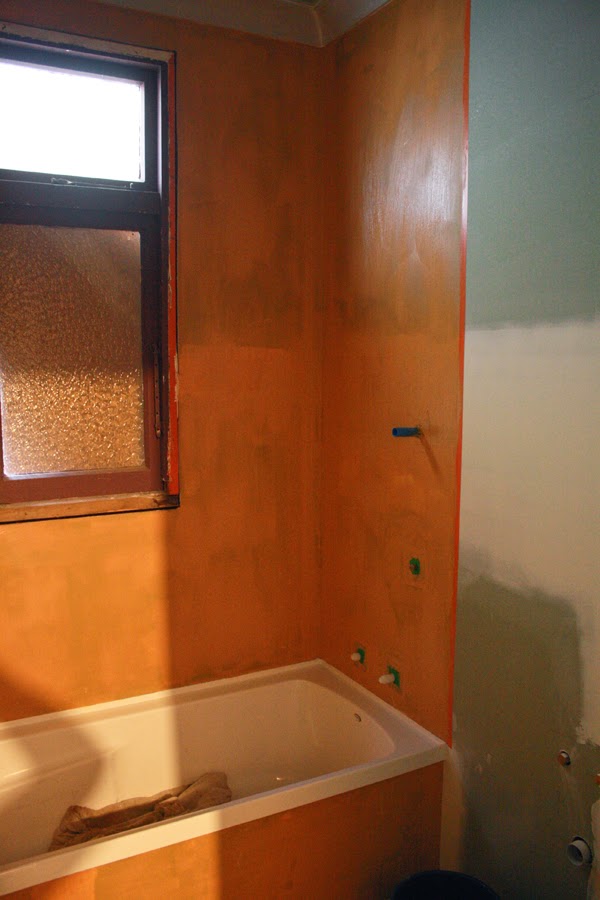 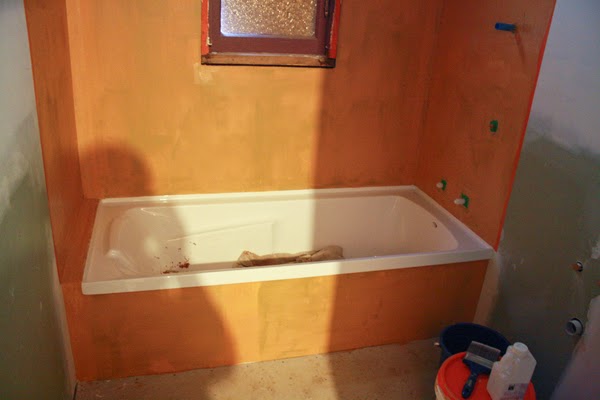 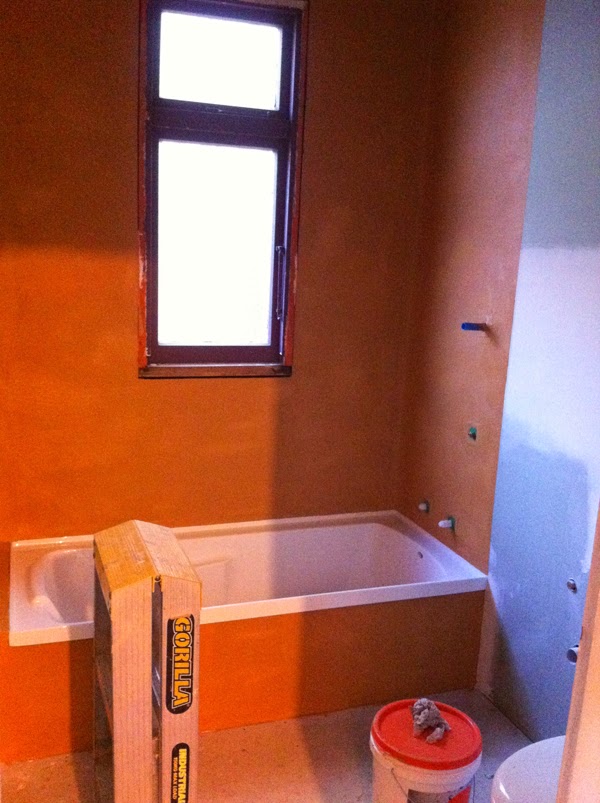 And now the tiles begin. White subway tiles with black grout will do rather nicely thank-you-very-much!! 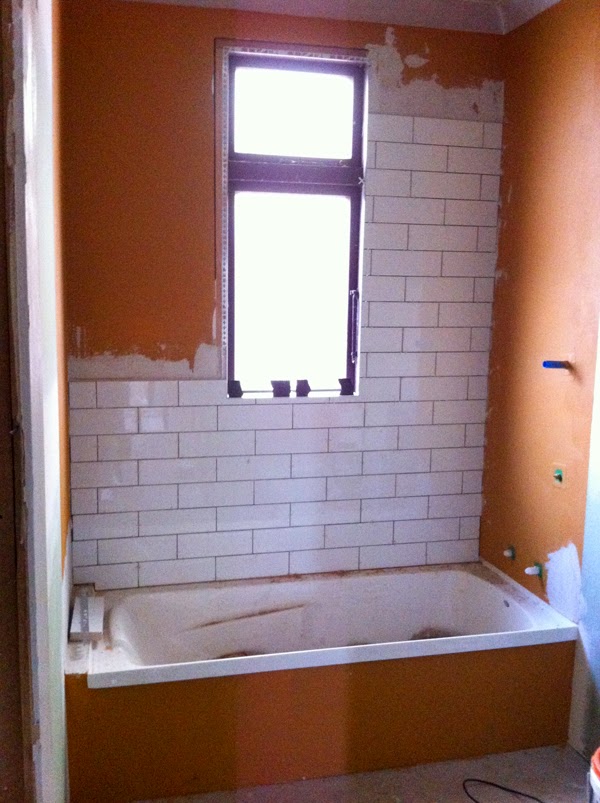 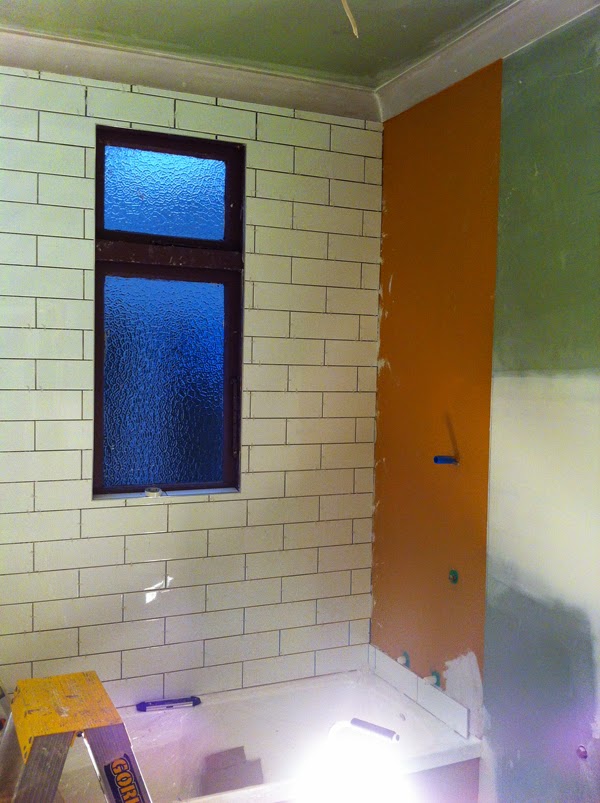 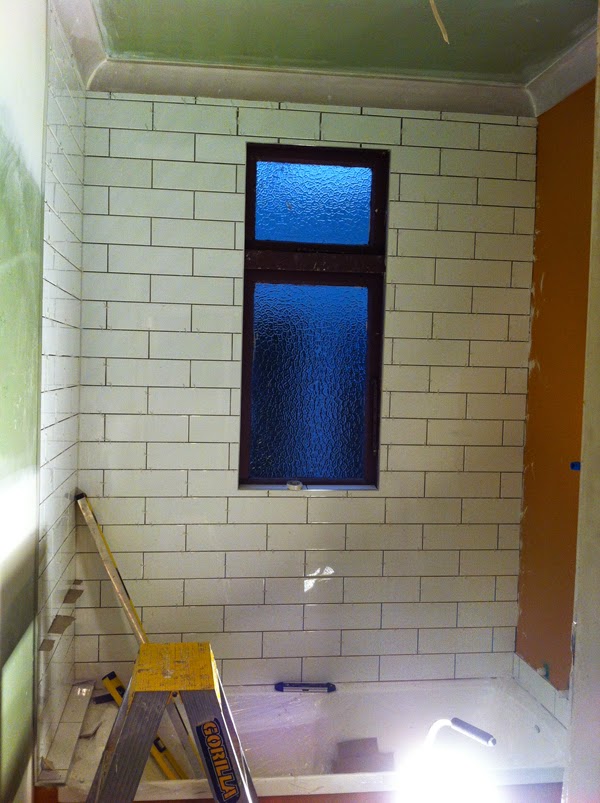 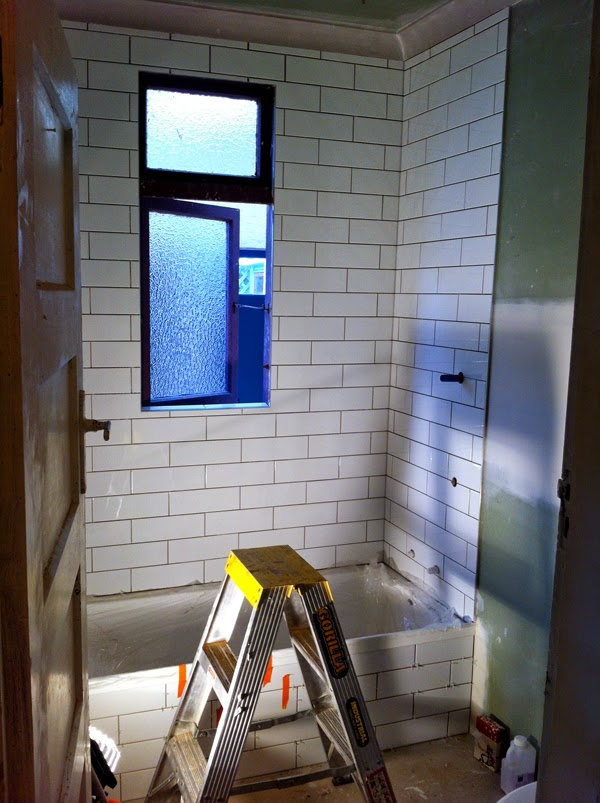 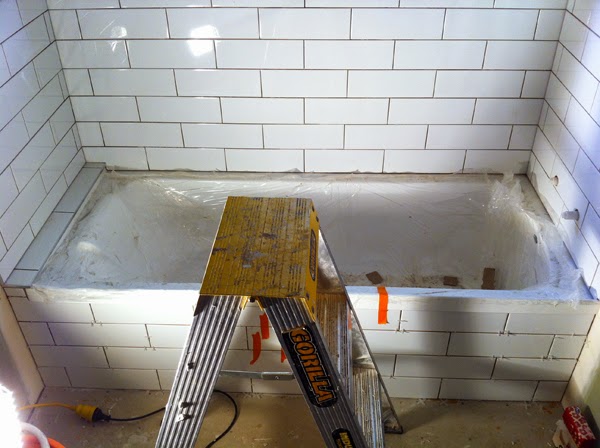 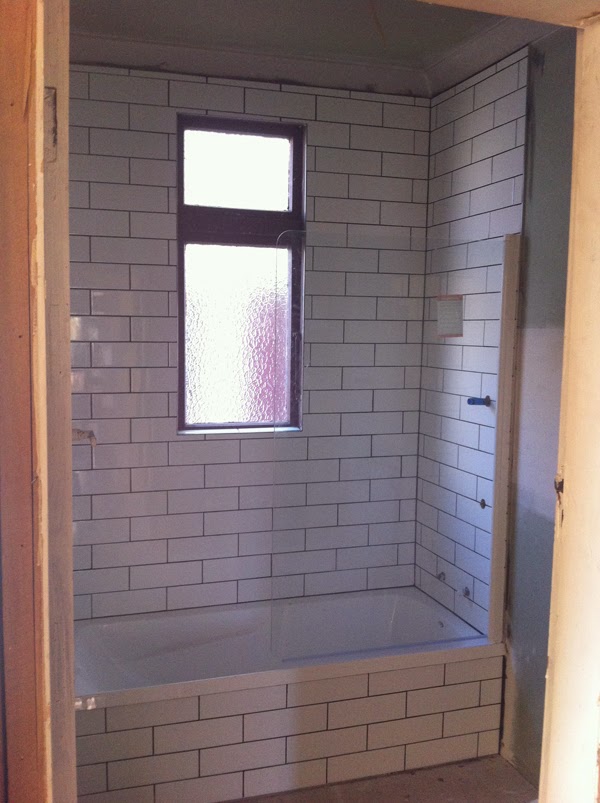 A-MAZING! Look at how light the room looks now! Even with no light in there (we didn't have a light in there for a few days after we were able to use the room again. Peeing by candle light anyone...?).

We also chose a clear shower screen (in the photo above, but hard to see, perfect!) so that the room wouldn't be blocked of natural light from a curtain and it would still feel open. The bathroom is still a small room, even though we opened it up a bit, and having a shower curtain would have ruined the feeling of space we managed to get with the new layout. 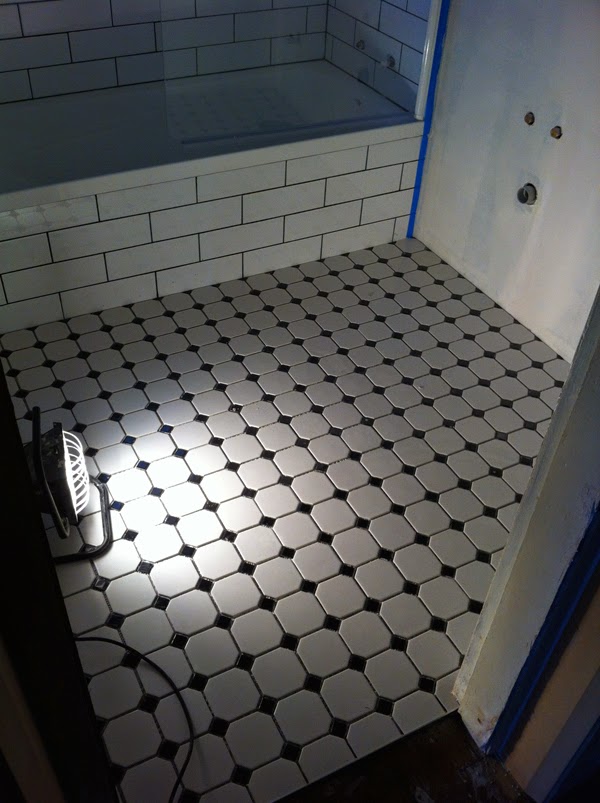 Oh em GEE, would you look at that floor. SWOON. No amount of exclamation marks can show you how much I love that floor.

And honestly, who would have ever thought I'd swoon over floor tiles or taps for that matter. As a long time watcher of home renovation shows, I honestly never 'got' the obsession with taps. I mean, it's a TAP!

Well, you can count me officially converted. I get it. I totally get it. 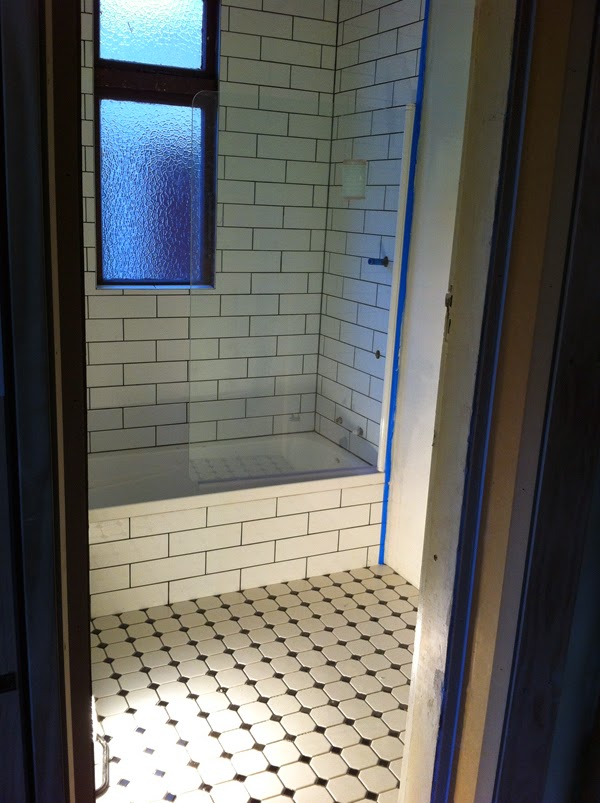 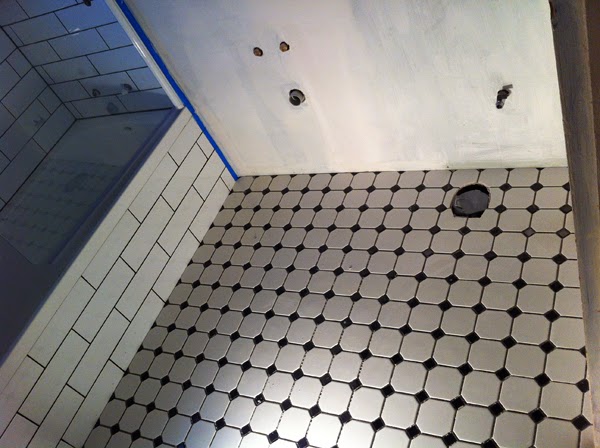 Once the tiles were in (David was back at this stage) David painted on an undercoat of smelly painty stuff (see above: aqua gib needs stuff put on it so other things will stick to it) and then a proper white under coat and then we got the real stuff on.

We went for Dulux Colours of NZ  - St Clair Quarter for the trim/ceiling colour, it looks white when you look at it, but it's ever so slightly grey in tinge, and Aniwaniwa half on the walls.

We liked the colours so much we continued them on into the lounge and then decided to use them for the whole house. The hall ways are painted all in St Clair Quarter though to try and keep them as light as possible. 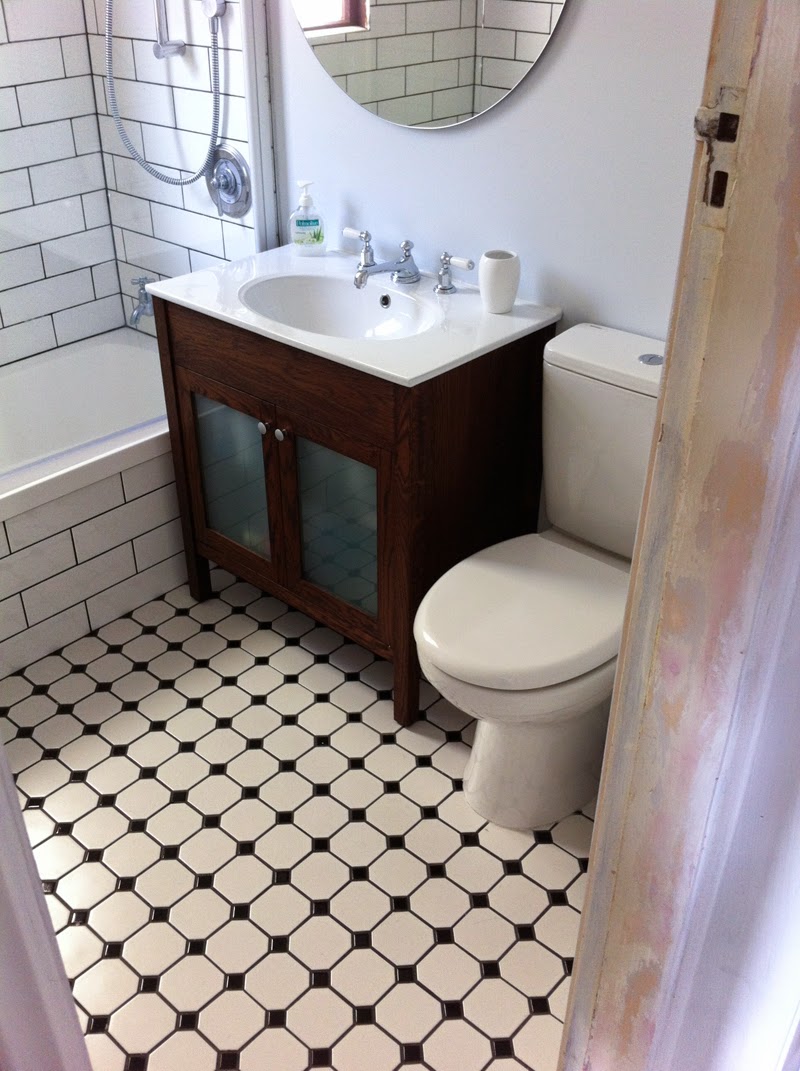 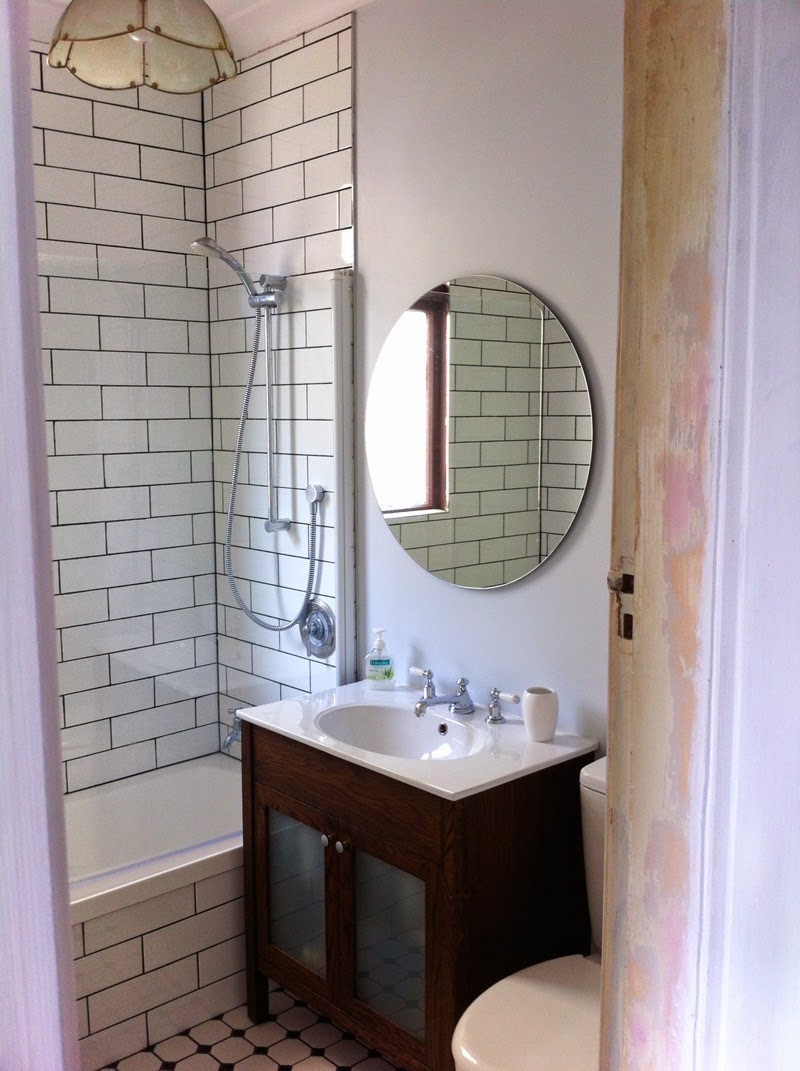 Just a sneaky wee taster of the nearly finished bathroom - that's the old light you can see in the photo above. I'm going to do a proper 'compare & contrast' post so we can see the old vs the new (mostly because I find it hard to remember sometimes too, I'm so used to it being nice now. But, you can refresh your memory here if you feel so inclined).